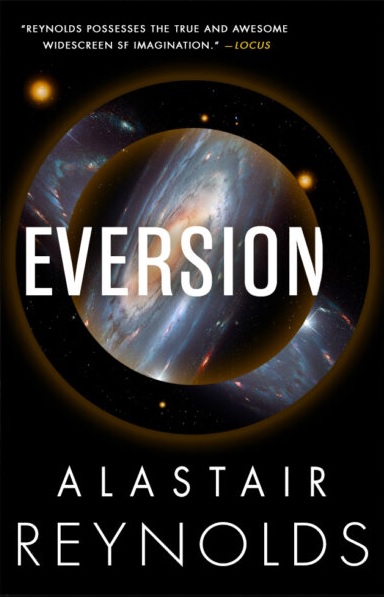 As a long time fan of Reynolds’ work, I’m always delighted when he releases a new book. I immensely enjoyed his earlier work where he explored far futures full of high-tech and transhumanist as well as posthumanist themes. His more recent take a different direction in time, though, diving into the past. Not that Reynolds is new to blending historic themes with more futuristic ideas. Take for example Century Rain, a brilliant novel ostensibly set in mid-twentieth-century Paris, only to reveal more alien influences along the way. Eversion is a bit like that in that not all is what it seems to be. The novel starts out strong with the protagonist, a sixteenth, seventeenth or eighteenth century surgeon, on a sailing ship going north along the Norwegian coast in search of a mysterious artefact. We get a good glimpse of his character and what motivates the man through his interaction with the crew and his environment. The writing is good, and I was transported into the fictional world quite effectively. It’s a sure page turner, with relatively short chapters, making it an addictive read. “Just one more chapter to see what’s happening now.” However, I did feel it slowed down a bit and maybe became a bit repetitive near the end. While the finale was satisfying in that it tied things together quite neatly, it felt a bit anti-climactic. All in all, this work lacked the truly epic proportions of Reynolds’ earlier work. Having said that, I would still recommend this book and thoroughly enjoyed it front to back.